My Family Pedia A Blog for Lifestyle and Travel
Home Family Health Vitiligo: it can be treated 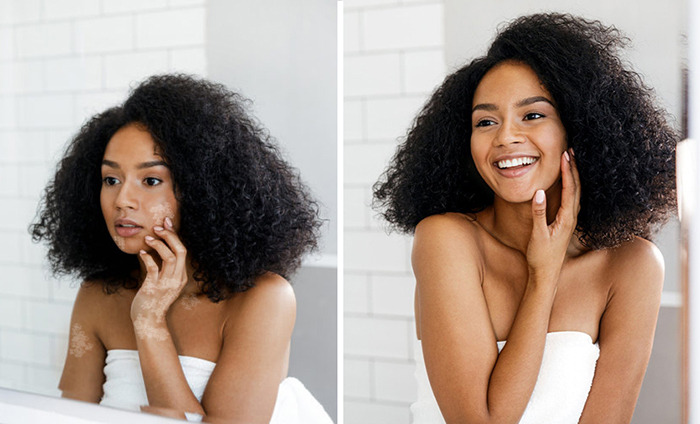 Vitiligo is indeed linked to an anomaly of the immune system: the lymphocytes, white blood cells responsible for defending the body against infectious attacks, will “mistake” and target the melanocytes, cells responsible for the pigmentation of the skin. . Hair and body hair can also turn white. It also happens (in less than 20% of cases) that the immune system attacks the thyroid. This is the reason why a balance sheet and a search for antibodies against the thyroid are recommended.

“In one out of two patients, this condition begins before the age of 20 and it can appear during early childhood, explains Thierry Passeron, who specifies that ” it is not a hereditary disease , even if there is genetic predispositions which make that one can have a susceptibility to develop it or not. The risk of transmission from parent to child, for example, is around 5-8%, which is not that high compared to the estimated 1-2% risk in the general population. »

A difficult disease to live with

Although this disease does not affect life expectancy, it does have a very strong impact on the quality of life of those who are victims of it. In some countries, they are sometimes even ostracized from society. Apart from the prejudices that stigmatize patients, the location and extent of white spots can cause significant discomfort. “Depigmentation in the genitals can be very difficult for young boys to live with, especially in adolescence”, emphasizes Professor Passeron, who continues: “It’s unbearable to be told that this is due to a state of mental stress. This unnecessarily makes patients feel guilty and robs them of all hope of being able to recover. »

Less risk of getting melanoma

Another misconception: vitiligo does not promote skin cancer, it is even the opposite. “We know for sure, since 2013, that people who have it are less likely to develop melanoma,” confirms the dermatologist. Exposure to the sun is also an essential component of the therapy: “If you want to repigment the discolored areas of skin, he adds, you have to expose them to UVB , either with sunlight, April to October, or with phototherapy sessions in a dermatology cabin. Not to be confused with sessions in a tanning booth with a beautician, because the latter dispense UVA rays, which are extremely harmful to the skin.

We cannot predict its appearance, nor its evolution. If there is an outbreak of vitiligo, it is necessary to consult urgently in order to slow down its progression . To make his diagnosis, the dermatologist uses Wood’s light, a blue light that brings out the skin regions from which the melanocytes have disappeared (the hands, feet and face are the most affected areas but all parts of the body may be involved). Its physiopathology is now very well known and there are effective treatmentswhich differ according to the types of vitiligo (see box). The response to treatment depends mainly on the location of the white spots. “Currently, we get repigmentation seven to eight times out of ten on the face, one time out of two on the body, assures the specialist. The most recalcitrant parts are the hands and feet. »

Between 6 and 24 months of care

The benchmark treatment (initiated by Thierry Passeron) consists of combining phototherapy sessions with the application of a cream: a topical corticosteroid for the body; an ointment based on Tacrolimus – an immunosuppressant not reimbursed by health insurance in the context of vitiligo – for the face. It is important to note that repigmentation takes time. It generally takes between six and twenty-four months of care , with a reassessment every six months.

In case of failure, we will turn to the therapeutic trials which are finally beginning to be developed for vitiligo. “A cream targeting a specific pathway of vitiligo immunity has already been evaluated in a phase 2, indicates the professor. It gives excellent results and will go into phase 3. It will most likely be the first treatment reimbursed, which represents enormous progress. Other treatments, in particular by general way will soon be tested in particular for the extended forms. As for the melanocyte transplant, indicated above all for cases of segmental vitiligo, it is successful eight times out of ten”, he underlines.

For more information see this ointment for vitiligo.