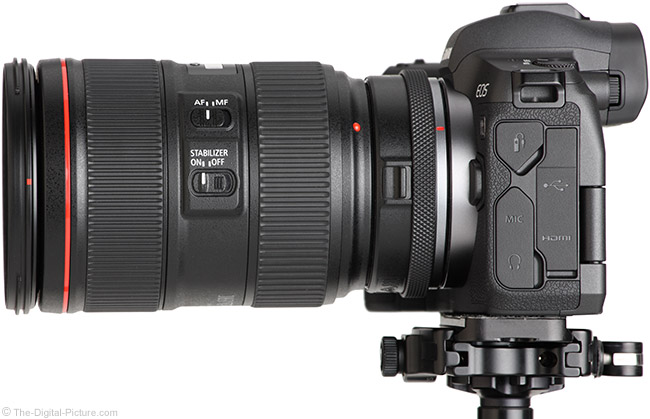 The filter in the Nikon FTZ II Mount Adapter, on the other hand, fits all EF lenses and can remain on the camera when the lens is changed. Incidentally, in addition to the polarizing filter, I bought a clear filter insert * that can remain in the adapter if I don’t want to use the polarizing filter. This also has the welcome side effect of completely covering the shutter/sensor chamber when changing the lens, so that dust can be effectively prevented from entering. I think this will prove itself on dusty safaris (which we hope to be able to plan again soon after Corona) in the future.

I was now interested in the question of whether the slide-in filter is optically just as good as my tried-and-tested screw-on filter, which after all alone cost more than €100. Does it make a difference whether the filter is in front of or behind the lens?

In order to ensure identical comparison conditions, I deliberately chose a static test setup with artificial light. An object that is very familiar to every Canon user served as the motif:

I placed the lens cap on a piece of white paper and backlit it at an angle of about 45°. I aligned the camera on a stable tripod at an angle of about 30 to the lid. I took all the shots with the Canon EOS R5 and the EF 24-105 f/4L II IS USM lens at 105mm focal length, aperture 8, 1/8s exposure time and ISO 100 and processed them in Adobe Light room Classic 10 with identical parameters. I set the white balance in Light room with the eyedropper on the white background so that any color deviations are also visible.

First a comparison with both filters set to the minimum effect:

All in all, only slightly more details with the Canon CP-L are indicated in the 200% view. In a direct comparison, the screw filter also has a slightly warmer image. But both effects are absolutely negligible.

And now the much more exciting comparison of both polarizing filters when setting the maximum visible effect:

Here, too, the image with the screw-in filter is a bit darker, so here is the comparison again with the image on the right being brightened by 1/3 f-stop:

In a direct comparison, both images fortunately show a comparably good cancellation of the reflections of the light source. That’s probably the main thing. Here, too, the screw-in filter shows a slightly warmer image display and a little less detail, which is only visible in the 200% view.

Incidentally, the resolution quality can be objectified indirectly via the size of the RAW files: Nikon FTZ II Adapter these internally with lossless compression. More detailed recordings can be compressed to a lesser extent without loss than less detailed ones. Since all other factors (image content, exposure parameters and lens) are the same for all recordings, the file size is a suitable measurement parameter for the amount of detail. The RAW files with the screw-in filter are between 1.6% and 1.9% smaller than with the slide-in filter. However, this minimal difference is absolutely negligible in real life.

On special request, I also compared both filter types under real conditions. This time Kilimanjaro in Tanzania had to serve as a substitute during my trip to Africa.

The images can be found below: on the left the image with the Canon drop-in filter and on the right the one with the B&W Käsemann screw-in filter. Both shots were taken at sunrise in quick succession with my Canon EOS R5 and the EF 16-35 f/4L IS with a focal length of 16mm and an aperture of f/6.3. I set both filters to maximum effect. I brightened the image with the screw-in filter by +0.23 for direct comparison in Adobe Light room, I left all other sliders in the neutral position.

Interestingly, the screw-in filter seems to give a slightly warmer hue. The camera’s WB automatic determined a color temperature of 6250 °K there. With the drop-in filter, on the other hand, it was 6500 °K Nikon FTZ II. However, this minimal deviation is certainly irrelevant in practice.

But enough of the preamble, pictures say more than 1000 words:

So what does the comparison show now?

Overall, I see little difference in the two recordings. At the same time, both images show a major shortcoming of all polarizing filters with super wide-angle lenses. The effect of a polarizing filter is highly dependent on the angle of the light rays to the viewing axis. Thus, both images show a maximum effect approximately in the center of the image, where the light irradiation comes from about 90° from the left. However, the effect decreases towards the edges, as the lens covers an angle of view of 108° diagonally and the angle from the viewing axis to the incident light deviates significantly from the ideal 90°. The edges of the image appear much brighter and have less contrast.

This effect is thus apparently independent of whether a drop-in or a screw-in filter is used. Whether you like the effect or not is a matter of taste. However, it cannot be avoided when using polarizing filters.

How To Buy The Best Handheld Barcode Scanner

Steps to Do Sears Card Login in a Minutes